North Carolina FIRST LEGO League had a total of 13 Qualifying Tournaments over a two-month span, November & December, in locations as far East as Cullowhee and as far West as Newport. We also had a special mid-week tournament at The Forge that focused on children with sensory challenges. The number of teams at each tournament varied between a minimum of 12 and a maximum of 36. The mixture of first-time and experienced Host Sites consisted of both private and public schools.

A "Thank You" to all volunteers and to each host site that opened up their doors to the excited children of North Carolina for such a wonderful experience. 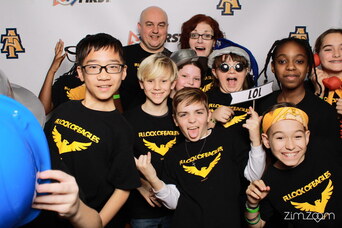 ​​Teams must be registered with NC FLL in order to participate in a NC Qualifying Tournament. NC is a closed state, therefore teams from other states may not participate in a NC tournament.
STATE CHAMPIONSHIP:
North Carolina is a two-state championship tournament region. You must qualify for the State Championships. Both tournaments take place during one weekend in January on the campus of North Carolina A&T State University. Depending on the bracket of your particular qualifying tournament, your team will participate on either Saturday or Sunday.

There will be approximately 60 teams participating on each day! Each day will result in the crowning of a North Carolina FLL State Champion. This is definitely the time to bring your "A" game, sense of humor, and open mind. Depending on your judged results and robot scores, your team will qualify for advancement to either the World's Festival or choice of available Open Tournaments.