We are holding competitions for the Compass and Promote Awards this 2022-23 season!
(see link below) 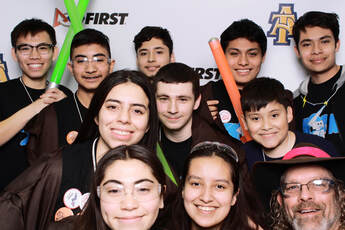 Awards at official FTC events recognize those teams that demonstrate extraordinary achievement in key areas central to the FTC program and mission. But, an important part of being a Coach is to help each team member to understand that the real reward is what they discover and learn, both from one another and through the FTC  experience.

Teams have spent a significant amount of time designing, building, programming their Robot, and learning what it takes to be part of a Team. For many FTC Teams, the event is the reward for all their hard work throughout the season. While there are several types of events, they all offer a fun and exciting way for Teams to demonstrate the result of their efforts.

The judged awards represent a positive way we recognize Teams who embody important values like Gracious Professionalism™, Teamwork, creativity, innovation, and the value of the engineering design process. FTC judging sessions do not include written or verbal feedback for students. FTC judging is a subjective process and students are encouraged to learn the important life skill of self-evaluation. This helps students prepare for professional interviews while developing other real world life skills.